Falling in Love with Solutions 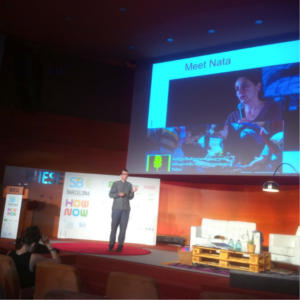 Trust someone involved in innovation for a living to find a link between women’s rights, statistics, Darwin and sustainability.

This was precisely what Giulio Quaggiotto, Senior Programme Manager in Innovation Skills, NESTA, did during his session.

Quaggiotto started the session with a thought-provoking idea, challenging the audience try to solve a problem without defining it. Most people were baffled. Traditional views of problem solving and innovation typically involved frameworks or matrices for defining problems, iterating solutions and testing them out on stakeholders.

While such a classic strategy sometimes worked, at other times, it might be better to reframe how we thought of problems and solutions.

Quaggiotto found inspiration in Nata, the founder of Guerilla Gardening Tbilisi, whose venture resulted (indirectly) in increasing the empowerment of women in Georgia. He highlighted other examples in various countries, including that of a cystic fibrosis sufferer who created his own machine to treat his illness.

“These people have already solved their own problem,” he said.

What such people had in common was that they had all solved the issue that another group were trying to tackle, unsuccessfully. This was because home-grown solutions were often-times more sustainable.

Quaggiotto suggested the audience (1) avoid “the armchair expert bias” of asking what the problem was and instead ask what the existing assets were and what solutions had been implemented; and (2) “think like Darwin, not Linnaeus”, i.e. look at the edges of the distribution curve to find possible indirect solutions.

In addition, there should be mechanisms to grow and propagate such solutions since “people who have solved the problem, typically don’t have an interest in spreading the solution.”

If done correctly, more people would be able to build self-sustaining systems of solutions to problems they might not even know about.