Sustainability and Profits: Two Sides of the Same Coin

Reporting sustainability is no longer optional for many companies. “You can wait… you can iterate… [and wikileaks has shown] it will get published if you don’t” said R. Paul Herman, CEO and Founder of HIP.

Moderating the workshop on strategic scorecards for sustainability, Herman brought with him both passion and gravitas from his varied experiences in organisations ranging from Ashoka to Mckinsey. 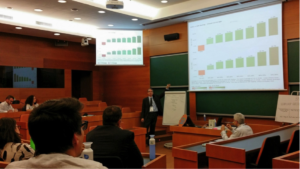 Underscoring the relevance of intangible factors on businesses, Herman showed charts measuring the impact of social, environmental and human factors on business performance. For instance, 84% of the value of S&P500 firms came from “intangible assets”. Companies both large and small could benefit from trying to link indicators on social, human and environmental factors to their bottom line.

While the comprehensive scorecards produced by large companies might seem intimidating to smaller firms, this did not mean that such firms should not attempt to do them.

“You can draft off some of the larger firms,” said Andrew Winston, Author of the Big Pivot. There was no need to re-invent measures or indicators if larger firms in the same industry had already created something.

Winston added that the expectations of companies had gone beyond just transparency: “there’s now a number everyone has to hit… it’s not enough to just say ‘we track our carbon.’”

Working together, Herman and Winston engaged workshop participants to build their understanding of how to create meaningful scorecards that provided not just transparency, but tangible links to performance in sustainability. 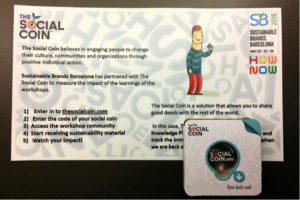 Using a five-step methodology, workshop participants were challenged to build and track their own sustainability plans, aided by social coins. Ending the session, Herman challenged participants to continue to think and dream big, capitalising on innovation and technology. If done correctly, sustainability and business performance would become more tightly interwoven as two sides of the same coin.