The Robots are Coming!

“I don’t want to work with humans” – anonymous robot

Mention cognitive computing and artificial intelligence (A.I.), and what might come to mind are Hollywood movies featuring autonomous super intelligent killer robots that threaten mankind. Indeed, various prominent individuals such as Stephen Hawking, Elon Musk, and Yuval Noah Harari, have all warned about the threats to humans that A.I can pose. 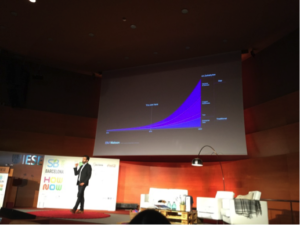 Paul Chong, Director of IBM Watson Group, EMEA, shared a different view. He preferred to call A.I. “Cognitive Business”, because, far from being a threat, it was a tool with the potential to transform roles, businesses and industries.

Chong shared three trends which indicated that technology was reaching a tipping point: (1) the rise of digital content (estimated to be 44 zettabytes in 2020); (2) the increase in computing processing ability; and (3) the move away towards computers that could learn and draw insights.

IBM’s “Watson” was already starting to make a positive impact in various sectors. For instance, Watson was working with the medical community to analyse large amounts of medical data to better match patients with genetic-appropriate therapies. What took weeks for an expert to analyse (with data involving genetic sequencing, medical journals, research papers etc.), took Watson a couple of minutes.

“The reality is… more about improving engagement with systems and less about automating out roles,” Chong said, in response to a query about the likely impact of such technology on employment. Chong asked the audience to envision a new future where interaction between brands and customers would be more seamless, enabling companies to be better equipped to create value. That “shift from digital and data to real knowledge and value” opened up a whole host of opportunities.

As for those who might still be suspicious of this brave new world, Chong said that it was important to debate both the upsides and risks as cognitive computing continued to advance.

While he did not have an answer to whether machines would take over the world, Chong’s session did underscore the involvement of IBM in what is sure to be a massive paradigm shift in technology. Not bad, for a company that started out selling cheese graters.