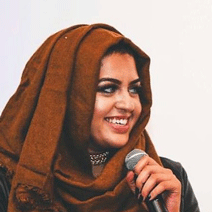 Amani Al-Khatahtbeh is the founder and editor-in-chief of Muslim Girl, the most-read platform for Muslim women’s voices in the West. Muslim Girl is forging a new path by reclaiming the narrative of Muslim women in Western media, emerging at the forefront of Muslim women’s issues in mainstream media coverage with its own unprecedented columns in outlets like Teen Vogue, Fortune, and Huffington Post. It became the first Muslim company to make the “Forbes 30 Under 30” list in 2016.

Amani became the first veiled woman to be honored in the media category, and rang the NASDAQ Opening Bell in 2016. She was named one of Teen Vogue’s “New Faces of Feminism” in its February 2016 issue, and by The Economist as a “Generation Prophet” in their December 2016 issue. Amani was invited by Michelle Obama to speak at the inaugural U.S. State of Women Summit. Her first book, “Muslim Girl: A Coming of Age” was released with Simon & Schuster in October 2016, and selected as an “Editor’s Pick” on The New York Times Bestsellers’ List. She also debuted the webshow “Uncovered” on MTV Snapchat Discover.

Amani is a rising voice in social, religious, and political issues, regularly appearing in media outlets such as CNN, BBC, and more. She has appeared on CBS’s “Face The Nation,” and spoken in spaces like the White House, Cannes Lions, and the Clinton Global Initiative University with former President Bill Clinton, among others. She currently writes a column for Forbes, in which she chronicles the startup journey of Muslim Girl from the perspective of a millennial woman of color entrepreneur.

Amani has been distinguished with honors such as the Digital Diversity Network Award in partnership with NBCUniversal, and was awarded a dedicated New York City Council Resolution chronicling Muslim Girl’s success in shifting the media representation of Muslims in America. She has been profiled in The New York Times, CNN Money, The Guardian, and beyond.