The day started off rather gray and gloomy, with it looking like it could rain at any minute; however, that didn’t seem to put a damper on anyone’s spirits as everyone was hustling to get everything prepared for the opening at 11:00. CCCB offered a great location for this kind of outdoor/indoor event, but it’s a pity there wasn’t a bit more sun.

As morning transitioned into early afternoon, a steady stream of people entered the plaza. I wasn’t expecting so many families with young children, but I quickly understood why. There were many activities that allowed kids to exercise their creativity and curiosity. There was a station set up for kids to cut out or draw pictures of fish and paste them to an ocean-themed mural, and there was even a pool where they could fish for toy sea creatures. BASF had set up a kids-lab where they held water-based science experiments. And last but not least, there was a life-size chessboard. That’s right, life-size! The pieces were made from consumer product packaging and used cardboard. They looked amazing, so high-five to whoever built them! It must have taken a LOT of work.

Aside from the entertainment for the young ones, there were many things that fostered interest for the rest of the family. There was a mural along one of the walls that was entitled “¿Qué quieres hacer con tu vida?” and people were invited to write what they wanted to do with their lives. There were many inspiring messages from people wanting to change the world, create an impact on the lives of others, or even just make people smile. I spent quite a bit of time here just reading and getting a better sense of what’s important to others, and I realized there are so many people like myself who want nothing more than to make the world a better place. #inspired 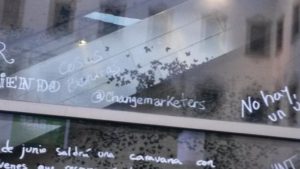 There was booth set up by Acciona with a parked car on one side of the venue. I use the term “car” loosely, because it looked more like a red and white tank that could probably go pretty fast. Definitely faster than my 50cc moto… I spoke to one of the attendants who informed me that it was in fact the very first 100% electric car that raced in the Dakar rally in South America. I was able to listen to a discussion by the driver, Albert Bosch, who has lived a fascinating life. From climbing mountains to speed racing, this man has done it all, and he has sustainability in the forefront of his mind, using sports as a vehicle to promote it around the world.

There were many other interesting discussions that took place throughout the day. I attended a session based on sustainability in fashion with bloggers and journalists sharing their opinion on fast fashion and what is going on in terms of sustainability in the field. There was an interesting quote made by Santi Mallorqui from Organic Cotton Colours that I took with me.  He said, “When nothing goes right, just go left.” I think it’s a great way of looking at life, and is essential in thinking of new ways to create sustainable businesses.

All in all, I would call this day a great success! It made me even more excited for the Sustainable Brands conference taking place this Monday and Tuesday, the 27th and 28th of April.

IESE MBA Class of 2016.  Member of the Responsible Business Club and organizing committee of the Doing Good & Doing Well Conference.